On the Road Again

As all good things must come to an end, baby and my summer at the River ended on Labor Day Weekend.

The original plan was for my husband and I to caravan back to D.C. on Sunday, beating what we imagined would be crazy traffic on Monday. The plan was completely foiled when my husband got sick on Sunday morning. So, Plan B had us up at 5am for a 5:30am departure. Both trucks were packed up, so all we needed to do was throw the baby, dog, two cats, and ourselves in the car.

Baby and dog–no problem. But the cats… to ensure that they’d be around in the morning, we’d put them on a 24-hour fast. We figured a little jingle of kitty kernels in their porcelain dishes and we’d be able to do our own snatch and grab and we’d be headed south. All went according to plan, baby and dog were in the cars and the cats came running at the sound of food. We were good to go–right up until the second cat started clawing, growling, and spitting. Steps from the car she squirmed right through my husband’s hands. He leaped forward to grab her again, landing chest first on the gravel driveway. All I saw was a fluffy black tail disappear into the woods besides the garage.

Have you ever tried looking for a black cat in the woods in the dark? Good luck, sucker.

It took us an hour to chase the cat into the garage, where she immediately hopped up on top of some 8 foot cabinets, curling into a ball right in the unreachable part of the middle. As my husband was standing on two milk crates, trying to pry her from her spot with a broom handle, I finally was able to pull the hammock that she was sitting on toward me enough to where I could grab her, stuff her into a milk crate, and wrap the whole thing in a smock to keep her from escaping before we got her in the car.

It was 6:45am. We hadn’t even pulled out of the driveway yet and it felt like a really long day.

I was glad we waited and got the cat (I seriously considered leaving her at the River until Thanksgiving), but I kept thinking about how the romp in the woods totally screwed up our time line. And when traveling long distances with an infant, it’s all about timing. I could just imagine get 15 miles down the road and having baby wake up and want to eat. That thought was so depressing to me because it was a reminder that not only did we have a long way to go, but we were going no where fast.

Fortunately, baby was pretty much the angel that he always is throughout the whole trip. We stopped twice to feed him, which coincided with a run to D&D and a stop for gas, and only lost a little more than an hour. The traffic gods must’ve been smiling on us because we hit no traffic despite the giant stretches of construction. 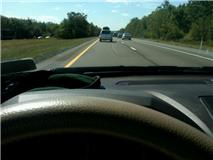 My husband took the lead for most of the drive, so I got a good, long look at the ass end of our gypsy truck . Despite my husband taking one carload of baby gear back to D.C. with him in early August, both of our vehicles–one Toyota 4-Runner and one Volvo XC90–were packed to the brim. (Yup, the roof rack totally came in handy once again.)

But how did we accumulate all this stuff in the matter of a couple months?

I went north with one overflowing car and now we were coming back with two. It was so bad that when we pulled off for coffee and bagels, my husband got out to walk the dog and there was another guy walking his dog and he says to my husband, “Why don’t you just get a Winnebago?”

While there were some miscellaneous items brought home–a cast-off grill from my parents, a sewing machine, and a rice cooker–the vast majority of stuff was baby stuff. Until I packed it up, I hadn’t realized how much new stuff I had received as gifts from wonderfully generous friends and, as much as I hate to admit it, how much stuff I had bought for baby.

After all the baby showers, I couldn’t imagine that this kid would need anything else for a long time other than stuff like diapers and wipes. Not so. All summer, I found myself buying cute things I saw in sizes 9 months and 12 months under the rationale that he really didn’t have much past 6 months. Even his 6 months wardrobe seemed a little skimpy. Not to mention that it’s really hard to say no when you’re seeing end of summer sales, where the cutest little jammies and onesies are like $3 or $4. I couldn’t help myself.

But now that I managed to fit it all in the car–or cars, to be more exact–I just have to figure out where to put it in my house.

3 responses to “On the Road Again”